Description: Smear is a collection of visual poems based on the tweets ex-president Trump and the inaugural addresses of US presidents. 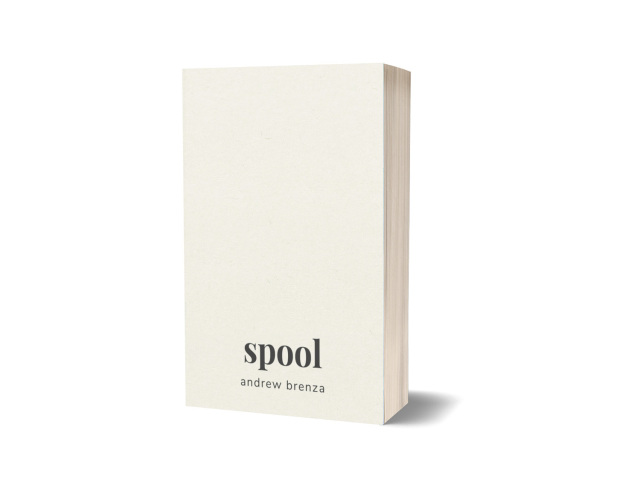 Description: Andrew Brenza’s Spool is a reckoning of our diminished natural world through the register of a disjointed, smeared, and unraveling poetics. Consisting of a series of breathless lyrical and concrete poems, Spool strives to represent both nature’s beauty as well as the tragedy of its destruction, a destruction which is, ultimately, the destruction of ourselves. But the book does not descend entirely into hopelessness, for the author’s unique approaches to poetic expression suggest an alternative way that humanity might imagine its place in the world, a way that fundamentally incorporates and enacts humanity’s vital connection to nature.

With two quotes from John Cage (“Nothing more than nothing can be said.”) and Samuel Beckett (“I can’t go on, I’ll go on.”) as starting points Andrew Brenza has created a narrative sequence of visual poems that “reveal the hidden tragedies in our typefaces” (derek beaulieu). Composed entirely from the Bauhaus font Automatic Souls is populated by sad, mechanistic creatures, trapped in a “weaponized meat machine” (Michael Sikkema). Below and sometimes embedded in the visuals is text, captions that suggest “an expression of the delusion of meaning.”

Automatic Souls is a chilling reminder of the predicament of the soul as we enter the 2020s.

Album, in Concrete is a book of visual poems that explores possible visual representations of melody in specific keys/letters. It is loosely constrained by the number of octaves available on a standard piano keyboard.

“Define the constellations. Fly to them on wings that, though so-named, are much more solid than gossamer. Add commentary to & on—sometimes directly relevant, sometimes provoked or stimulated by, sometimes tablet wor(l)dplay, sometimes the ranting of a wordsmith howling at the moons that there weren’t enough words in the language & he’s sometimes had to make more up. Gossamer Lid is both a gnostic gospel for the 21st century & an alchemist or chiromancer’s journal. The entire is a book of poetry that is wide-ranging, brilliantly integrated, oft-times demanding in the reading of it. But well worth that reading. & you’ll never see the night sky in the same way again.” — Mark Young

“The poet Paul Celan changed his German when it sought to eradicate him. In parallel, Andrew Brenza constructs tongue-twisting portmanteaus and neologisms because English refuses to register the environmental eradication (the ‘horrorscope’) to come. Gossamer Lid asks us to approach the earth from a new angle. Concrete poetry meets the poetics of hard science in this necessary constellation of ‘striploss sunbliss.'” — Jena Osman

“Andrew Brenza’s gift splays gossamer and gusto via aptly architected and sonically potent language that recasts its role into a fundament that morphs beyond what was thought possible. I am stunned by the exquisite recreation of what syllables can do together, what visual dimensions resonate far beyond page-bound depictions of their own miraculous being. This is poetry that confronts the curious reality of how small our species is with the largest picture that we stretch to know. Concurrently, we discover an immensely robust life force in Brenza’s mind, defying all suspicion of our collective insignificance! Do not miss this book. It is extraordinary.” — Sheila E. Murphy

Under a Digital Sky (Trainwreck Press, 2020)

an excerpt from Alphabeticon (No Press, 2018)